New Zealand has been one of those destinations I’ve always assumed I’d visit when I was older. The whole “caravanning” thing has always been my idea of a nightmare, just the idea of having to empty my own piss tank would send shivers down my spine. However after much deliberation my boyfriend and I decided that NZ was the perfect mix of outdoors and ruggedness to suit his interest, and wineries and cheese to suit mine.

So we picked up our van affectionately known as Barbara (it’s Barbara or nothing, she doesn’t appreciate nicknames) and started driving towards Mount Cook. Only being a three hour drive from Queenstown meant we could travel at a leisurely pace and stock up on supplies, which included spending more on groceries for the week than we have in our entire life. If you’re a New Zealand novice like I was, be prepared to pay a fortune for anything and everything. I wish I could say that our $8 loaf of bread changed my life, but we forgot to pack the Vegemite so I can’t.

Our first night is still considered to be the highlight of the trip so bare with me while I ramble! Being in the heart of the national park meant we were surrounded by snow capped mountains and stunning hikes, nothing like opening a bottle of red in 3° temperatures and sitting back to take in the view. And with the sun not setting until 8pm every night, we really got to enjoy everything this day gave us. Even in the chilly temperatures we still had a constant stream of ducks, rabbits and birds trying to con us into handing over our ridiculously expensive bread. Unfortunately for them we live by the important mantra of “Don’t Feed the Wildlife” (regardless of how much I wanted to).

Before I go on let me clarify something, I am not a “hiker”. I definitely appreciate nature and wildlife but if there was some sort of elevator to get me to the end of the 11km trek then I would have been first in line. But hey, when in NZ right? And the end result was nothing short of spectacular walking into Hooker Lake which is surrounded by snow capped mountains and icebergs. The feeling of fulfillment I had even helped to dampen the pain of my blisters. And the celebratory bottle of wine may have helped as well, just a tiny bit.

Desperately needing to power our van in order to watch TV, we decided to leave Mount Cook and drive the three hours to the ski town of Methven. After realising that we were shit-outta-luck because the TV didn’t have an antenna cable, we decided to do the death defying drive up to Mt Hutt where once again, and this will be the general theme of this caravanning story, thank-God I wasn’t driving! Death defying drops meant that I sat in the passengers seat with my eyes closed.  Highly recommended if you’ve got the stones to do the drive, otherwise if you’re anything like my sister who “believes” she’s a good driver, then stay in town and don’t attempt!

Safely back on sea level, and after scraping myself off the passenger seat floor we decided to start heading towards Franz Josef where we would be embarking on the most exciting part of our trip – a heli hike to the top of a Glacier.

To get to Franz Josef we had to make the 5 hour drive through the stunning Arthurs Pass. The perfect combination of rain and fog made for a truly picturesque drive, albeit once again it was very lucky I wasn’t the one driving. Through the windy range which we used to get to the West side of the country this drive was one of the most scenically rewarding journeys, although don’t celebrate a drive well done in the small town of the same name. Two beers at the local pub cost us $35 which even for two self proclaimed piss-pots had us reaching for our coats and car keys to hightail it outta there towards Franz Josef.

This is probably the time to tell you that it rains an average of 200 days a year on the West Coast of New Zealand. You heard me right… 200 days a year. So if you’re planning on getting a tan on those Western Beaches then think again. It’s cold, grey and one of the towns we drove through still had an advertisement in the window for developing Kodak film. If there is ever a zombie apocalypse then this is where it’ll happen.

This also meant that with the high rainfall, unfortunately our heli-hike to the Glacier was cancelled. Devastated, but also appreciative around the safety concerns we decided to pack up Barbara and brave the weather to continue with the rest of our road trip.

All this rain did come with an upside, it guaranteed a magical trip to Milford Sound. Pouring rain meant two things, 1) the waterfalls in the sound sure did put on a show for us and 2) I would spend the better half of the tour with my head over the back of the boat trying to control my salivary gland. Even with the chronic motion sickness Milford Sound was a spectacular sight to see, with scenery to rival any Jurassic Park movie released. No dinosaurs in sight but we did manage to spot some New Zealand Fur Seals which are now a protected species. 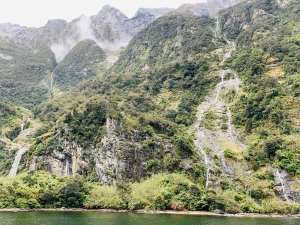 Getting back in Barbara and leaving Fjordland had us nearing the end of our 10 day adventure back in Queenstown. With three days to go we decided to posh things up a bit by treating ourselves to a stay at the St. Moritz. Far too fancy for the likes of our scruffy selves, we indulged in our first shower in 5 days then headed up the Gondola for a lil’ competitive luging. If you haven’t heard of the Queenstown Luge then I highly suggest checking it out, as our day became one non-stop competition escalating into high stakes bets that I most definitely lost. Still worth it, even if that means I’m now on laundry duties for the next 6 months.

Throughout my searches whilst planning this trip, the one constant “Must Do” that kept popping up was the Onsen Hot Pools in Queenstown. We were driven out past the city where we arrived on a cliff side overlooking the magnificent Shotover River canyon. We were lucky enough to have booked right at sunset so we relaxed in our hot tub, champagne in hand to watch the sun go down. One tip I’ll give for those who may use this as a travel guide, champagne is limited to one glass per person due to the heat in the tub. So if you’re prone to a few cheeky vino’s then have them before you go.

With our holiday coming to its last day, we decided we needed one more hit of adrenaline so we organised an Eco Zip-Lining Trek that combines speed with information around sustainability and eco-tourism. Zipping through the forest at 70km p/h against the backdrop of Lake Wakatipu was the perfect way to get the heart rate pumping. And best of all, I managed to film my final descent without dropping my phone in the forest.

With two feet back on the ground, it was time for us to head home. The flight home gave me the time to sit back and reflect on our journey through New Zealand. What originally started out as an impulse purchase ended up being the perfect holiday mix of relaxation, adrenaline and even education. Two weeks of stunning scenery, whitebait sandwiches and more Pinot Noir than I care to admit, I was sad to leave. Even though New Zealand was never high on my bucket list it was hands down one of the most rewarding holiday’s I ever had. So much so that I might finally give the Kiwi’s I work with a break on how they say the word deck….. maybe.

N.B.  After paying the exorbitant price of $280, we were able to palm the responsibility of cleaning Barbara’s waste tank to someone else. Money well spent.